40 Years With the Aramaic Jesus… 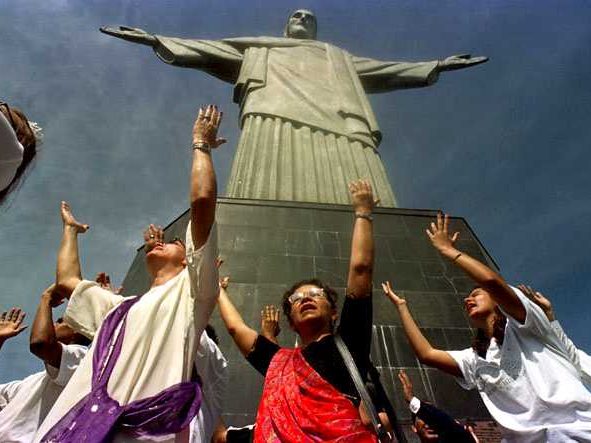 Next year marks the 40th anniversary of the beginning of my public Aramaic Jesus work with the chants and dances to the Aramaic Prayer of Jesus. It was a trip that has taken me literally around the world.

Many of you have written to me to say how understanding Jesus’ spirituality through his native language has helped heal the fear, shame, guilt or doubt instilled by a less than ideal religious upbringing. Because Yeshua’s words were used to justify the worst unripenesses in Western culture—including ecocide and all -isms, those holes exist in most of us. Others have written to say how healing this piece of your psyche has also enabled you to go more deeply into practices of awakening in other traditions.

C.G. Jung once wrote that the “split in the Western spirit” makes it impossible to fully understand the intentions of Eastern traditions without further inner work:

“What it has taken China thousands of years to build cannot be acquired by theft. If we want to possess it we must earn the right to it by working on ourselves. Of what use to us is the wisdom of the Upanishads, or the insight of Chinese Yoga, if we desert our own foundations as though they were errors outlived and settle with thievish intent on foreign shores like homeless pirates…. In the course of the centuries, the West will produce its own Yoga, and it will be on the basis laid down by Christianity.”

Looking back on the past four decades, I found all this true from my own experience.

My own parents were freethinking Christians, deeply involved in holistic health, organic gardening and receiving wisdom from within. I like to say that, beyond hearing Bible stories each night before bed, I was raised with a “holy trinity” of three C’s: chiropractic, (Rachel) Carson, and (Edgar) Cayce. I ate cooked millet for breakfast, while all of my friends were nose-deep in sugared cereals. When the DDT trucks came through, I ran home and hid in my room (after shutting the windows, of course!), while my friends played through the toxic fog.

Yet, in order to appear “normal” in our village–my father being one of the first chiropactors in Illinois, I was sent to conservative Christian schools. There I had to learn by heart large parts of the King James Bible translation and all of Luther’s catechism. This made for an unusual childhood, for sure–inner family v. outer world—and I never would have anticipated becoming involved in Jesus’ Aramaic language.

Gladly pursuing a more secular university education, I became involved in the anti-war and early ecological movements and then worked as a professional investigative journalist. Yet I found myself burned out at 25 and doubting whether anyone (including myself) really made decisions on the basis of “facts.” For the most important choices I had made in short life, I never had all, or even most, of the necessary information. So I asked myself, “What causes me to change?”

The answer seemed to be something hidden inside, in my psyche or subconscious. I didn’t know which, I only knew that Eastern ways to “still my mind” didn’t work. This set me on a spiritual search that led to an editorial book project, where I found the words of Samuel L. Lewis (founder of the Dances of Universal Peace) saying that before he died, he wanted to learn to pray the “Lord’s Prayer in Aramaic.” That rung a bell.

I had been raised hearing various languages (German, Polish, Yiddish) and always loved them. But Aramaic was another step. Typically over-doing things, I also ended up learning other ancient Semitic languages, a long slog. I then found that I needed to learn yet another language—the academic one—and discovered by rising through the ranks that what I had unveiled about Jesus’ spirituality was for real, not refutable. Yet my interest and passion were driven by childhood spiritual experiences of Jesus as well as later ones when I began to chant the first word of his prayer in Aramaic: Abwoon.

Eventually I came to the conclusion: you don’t need to identify as the member of anything or any -ism to be a friend of Jesus, and to feel the power hidden in his words and revealed in his actions. So many of you have discovered the same.

Forty years later, there is a large community of independent people worldwide from various or no faith traditions who use Yeshua’s words together with body awareness in chant, contemplative prayer or sacred movement: towards awakening in heart and soul to awakened service.

Back to News Page