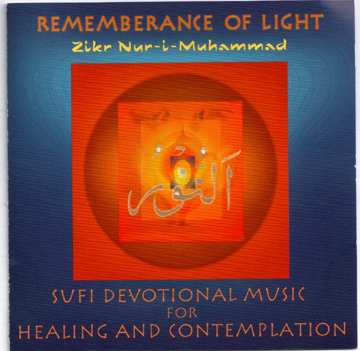 This ceremony of Zikr from the Chishtia branch of the Sufi tradition was given to help awaken the human senses to the light of consciousness in nature and the entire manifested cosmos. This light, which the Sufis call Nur, points to the Unity of Being, beyond individual names and forms.  When the human being awakens to its capacity to contain the consciousness of the cosmos, then it awakens to its original, ecological self and fulfills the purpose of life.

“The music and arrangement of this zikr came to this person while on an extended personal retreat during the last days of 1981, during a concentration upon Prophet Muhammad, peace and blessings be upon him.  The state of awareness entered was what the Sufis call fana–effacement in the consciousness of a teacher.  As such, there is no sense of personal ownership, only a responsibility to share what has been given for the benefit of all beings. During the same retreat, this person received music and a transmission of movements for the Aramaic Prayer of Jesus. He reported these experiences to his teachers and they confirmed them. Unlike the Aramaic Prayer, he waited more than ten years before he began to share the Nur-i-Muhammad Zikr widely, because he did not feel that his inner preparation was sufficient.  It may still not be sufficient, but while co-leading a group peace pilgrimage to the Middle East in September 1993, he was prompted to share it to help bring peace between humanity and the earth, beyond the sectarian divisions of religions, natures and cultures.  All praise is due to the One and Only Being!”

The six parts include:

Warning: The mp3 files here are in a digital archive (.zip), which cannot be downloaded directly to smartphones, iPads, Chromebooks or tablets. Download your choice to a PC or Mac computer first and then transfer the files to your phone or portable device. Please verify that your equipment is capable of downloading and playing standard mp3 files. Please determine first where–into which folder or location–your computer downloads files. Usually your internet browser will tell you or ask you where they should go.

(*Any remaining stock of the original CD can be purchased by enquiring at: legacyfulfillment@abwoon.com