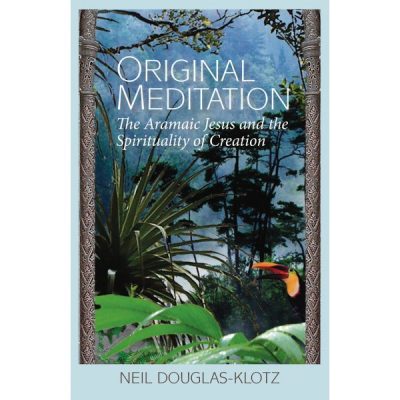 This audio download is a companion to the book Original Meditation by Neil Douglas-Klotz (originally titled The Genesis Meditations) and allows the listener to learn to say and chant the words to 14 chants in Hebrew, Aramaic, Greek and Arabic related to our shared cosmic creation stories. Each phrase or word is repeated several times, with space for the listener to repeat it, which allows for easy memorization and/or use in conjunction with the meditations in the book.

“While completing the translation and commentary work involved with Original Meditation, I went on a series of spiritual retreats between 2000-2002. Like other Middle Eastern spiritual traditions, the Sufis teach methods of chanting sacred words, which sometimes, during certain spiritual states, result in melodic chants that can be shared with others. The following chants arose through this process and are offered to help readers of Original Meditation find their own way into these shared stories of blessing and hope. I have done the rendering of the ancient Hebrew words according to a pronunciation that I feel is the closest to the way that the ancient Hebrew of these stories was originally chanted, before it changed due to later influences.” –Neil Douglas-Klotz, 2003

Part I – Bere’shith (Genesis 1:1-4a). This part of the story celebrates our shared beginnings—unfolding in heat, vibration and expansiveness from a mysterious “before.” On an inner level, whenever we begin something new, we can proceed through these states: beginning in blessing, breathing into what is unknown, seemingly chaotic and confused within, the birth of a new consciousness (the light), and celebrating and dancing this new insight into reality.

Exploring the Germ of the Seed of Self (chapter six, p. 122)

Part II –  The Dance of Holy Wisdom (Proverbs 8:22-24) (Genesis Meditations – chapter eight, p. 156-157). This story describes the role of cHochmah, Holy Wisdom or Sophia, at the beginnings of creation. She unites with the Ever-Living Life, pours herself out and dances the birth of all that is. On the inner level, this describes the way in which we attract and are attracted by anything (or anyone): life-energy arises, we pour ourselves out or toward the “other,” and we dance together. When we do this in a conscious way, Holy Wisdom helps us gather a new voice of our selves to the shared table of consciousness, that is, our “I am.”

Pouring Out the Self:

Dancing Together into a New Unity:

Part III. The First Remembrance (Quran Sura 7:172) (Genesis Meditations, pp. 196-198). The Quran describes a day in primordial reality when the One Being reaches into the depths of the First Human and asks the following question of all future human beings, male and female: “Do you agree to reflect the fullness of consciousness of all beings who have gone before you, and do you agree that there is only One Reality that we all share, One Being behind all of the abundantly diverse forms of being?” The Quran reports that we answered, “Why not? We agree to experience and live by this!” According to the classical Sufi Muhammad Abu Bakr Kalabadhi (d. 990 CE), this was the first dhikr, the first remembrance of divine unity.

Part IV. First Humanity (Genesis 1:26, 28) (Genesis Meditations, p. 188; Desert Wisdom, p. 180-181). This part of the Genesis story describes the creation of the First Human in the “image” or living reflection (betzalmenu) of the One Being, holding within us the awareness of all the beings that have gone before us in the caravan of life. There is clearly some divine ambivalence to taking this step in the independence of consciousness. The First Human contains both male and female, but also the ability to “forget” that it is part of one Reality. In the second chant below, from Genesis 1:28, the storyteller tells us that the collective consciousness of the human, being a very centralized fire of the entire cosmos, could override its older interior structures—subconscious, instinctual self, reptilian intelligence, and all the prior developments that it received as a heritage. And yet the blessing given to the First Human is that it should have “dominion” along with all previous beings (wa chi-beshuha wa redou b’), not “over” them as the Hebrew is often mistranslated.

In the Image of Unity

Part V. Seventh Day – Renewal and Return (Genesis 2:2) (Genesis Meditations retranslates the following, similar verse, 2:3 at p. 220; Genesis  2:2 is retranslated in Desert Wisdom, p. 221, as below). As we look toward and re-feel our shared beginnings, at the head of a moving caravan of creation, we sense the real meaning of peace. “During the seventh and consummating period of its intelligent action, the Universe realized the fulfillment of part of its own dream. The establishment of ruling principles and visions was complete. The story line of the Universe, the direction of its own creative destiny, was fully initiated. A clear ‘I can!’ had resounded from the heart of the Universe in response to the questioning void with which the whole process began. Nothing would return to the way it was, no matter what happened.  Because this was so, the Universe permitted itself the most mysterious creative act of all. In addition to full engagement in the experiment of creative being and becoming, which happened in the first six luminous periods, it also restored to itself the awareness of its own origins. When the Universe embraced what had been ‘before the beginning,’ something even more complete rippled through its being: empathy with everything which drops its form and returns to the other side of being, with all that ‘dies.’”

Part VI. Genesis Now! – Creative Word Resounding On (John 1:1) (Genesis Meditations, p. 158). “In the very Beginningness was, is and will be existing, the Word-Wisdom of the One, the ongoing Word and Sound, the Message and Conversation that has not stopped and has never started because it is always Now.” Both the Aramaic and Greek versions of the first phrase are included in the chant. The story of creation that we share continues…

Original Meditation: The Aramaic Jesus and the Spirituality of Creation (2016, ARC Books)

Warning: The mp3 files here are in a digital archive (.zip), which cannot be downloaded directly to smartphones, iPads, Chromebooks or tablets. Download your choice to a PC or Mac computer first and then transfer the files to your phone or portable device. Please verify that your equipment is capable of downloading and playing standard mp3 files. Please determine first where–into which folder or location–your computer downloads files. Usually your internet browser will tell you or ask you where they should go.

(*Any remaining stock of the original CD can be purchased by enquiring at: legacyfulfillment@abwoon.com)