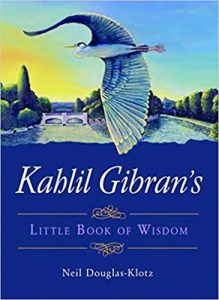 The last of my four “little books” of Kahlil Gibran is now out, this one full of wisdom for daily life–living in community and living alone, plus Gibran’s often trenchant and humorous sayings, stories and verse on politics, religion, and economics. (My European friends will need to wait another few weeks for the release here.)

The book also contains the source of JFK’s famous “Ask not what your country can do for you…” speech, in its entirety. Here’s a short excerpt from Gibran’s article written in 1925:

When the spring sings its hymns, the dead of the winter rise, shed their shrouds, and march forward.

Come and tell me who and what you are.

Are you a merchant using the need of society for the necessities of life for your own monopoly and exorbitant profit? Or are you a sincere, hard-working and diligent person facilitating the exchange between the weaver and the farmer and charging a reasonable profit as a broker between supply and demand? If you are the first, then you are a criminal, whether you live in a palace or a prison. If you are the second, then you are a charitable person, whether you are thanked or denounced by people.

The book contains many stories, my favorite entitled here “A Voice from the Storm,” in which the narrator (Gibran?) encounters an ex-political leader now living as a hermit in the mountains, who tells him:

“No, my brother, the West is not higher than the East, nor is the West lower than the East. And the difference that stands between the two is not greater than the difference between the tiger and the lion.”
“There is a just and perfect law that I have found behind the exterior of society, a law that equalizes misery, prosperity, and ignorance. It does not prefer one nation to another, nor does it oppress one tribe in order to enrich another.”

The book closes with a section entitled “Wisdom Beyond Words,” in which we hear some of Gibran’s deepest and most beautiful insights:

Let him who would have wisdom
seek it in a buttercup or
in a pinch of red clay.

I am still the singer.
I shall sing the earth,
and I shall sing your lost dreaming,
which walks the day
between sleep and sleep. Canada pharmacy has a large assortment and high-quality service. Customers leave only positive feedback, thanks and come back to us again. You can order drugs in a pharmacy over the Internet directly on the website or by phone.

I hope you enjoy this last one. it has been an enjoyable two year’s journey for me to select and re-edit one of the best-known and yet under-valued writers of the 20th century, a refugee to America from what was then called “Syria.” Would he be welcome today?

You can order the book through the Abwoon Network site, via various online sources here.