On the Passing of Rabbi Zalman Schachter-Shalomi 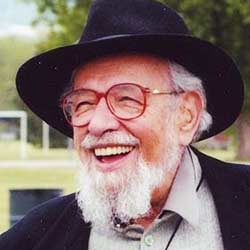 Some of you may have heard of the passing of Rabbi Zalman Schachter last week. Rabbi Zalman, for those who may not know him, was the founder of Jewish Renewal and one of the most influential spiritual figures of our time. He strongly encouraged me during my early years of Aramaic Jesus research as well as in the creation of many of the early Hebrew Dances of Universal Peace (like Kadosh and Baruch Kevod). You can read an excellent obituary from the 9 July New York Times here:

For those of us who felt the blessing of his work, we may want to send prayers in the next six weeks for his soul’s journey as well as for his community’s wellbeing. Fortunately, Reb Zalman trained many fine students who are carrying on his work around the world.  I have pasted in below a suggested practice from Pir Shabda, the head of our Sufi lineage in this regard. The Sufi practices themselves come from Zalman, who was recognized as Sufi Sheikh and who offered them to Pir Shabda after the death of the latter’s son. You will find the practice below as well as the equivalent Hebrew pathways/steps (sefirot) on the Tree of Life.

My most lasting memory of time spent with Reb Zalman was during a Lama Dances of Universal Peace Camp in the 1990s. Zalman had been on private retreat throughout our camp and only came out of silence once, to attend the Friday Shabbat at Lama, which usually included some Hebrew Dances. When I asked Zalman whether he would like to say anything, instead of speaking he quickly organized 100 or so of us into three non-concentric circles, dancers facing out, with a small space in the middle between the three circles. “Now,” he announced, “we’re going to do a Three Rings peace dance” (with reference to a Holy Land peace project of Murshid Samuel Lewis by the same name, inspired by Lessing’s story Nathan the Wise).

He set the three circles to begin side-stepping, chanting “Allah” or “Kyrie Eleison” or “Shema.” Then he brought Tasnim Fernandez (with whom I began the DUP Network) and myself to the center of the circles with himself. “We’ll stand back-to-back facing the dancers and also rotate,” he said. “Now you give the darshan (blessing-glance) of Muhammad, Tasnim. You do Jesus, Saadi. And I’ll do Elijah.”

The whole thing, as it were, lifted off. For about 45 minutes, I was in another state. I couldn’t see what Tasnim or Zalman were doing, but I did see what came back from the glance of the dancers they had touched, as we all circled and chanted for what seemed an eternity. By the end, everyone was bringing through blessing and joy from all three messengers. At the end, we sent it out in a wave of peace for the world.

We could use a few more of those peace waves now, and a few more of us to be as bold as Zalman was in pursuit of it.  ‘Peace’ is dynamic, not a static state, so we need to keep planting the seed that best grows around us and in us.

May you continue to dance with the angels, Reb Zalman….Baruch Kevod Yah Mim Komo…May blessing come to and through us from the consciousness of the Ever-Living One!

Love and blessings to all,

“When our son Solomon died in January 2012, Reb Zalman called us and shared practices from the Jewish tradition of sacred phrases, one per week for seven weeks, very much like doing prayers while someone is in the “Bardos” (Tibetan for “in-between”). He translated the Hebrew into our Arabic wazifa phrases.

“I offer them here for those of you who want to be involved in this form of prayers for his Journey!

They way it works out is:

From the sefirot of Tree of Life (as suggested by Netanel Miles-Yepez, one of Zalman’s students):

To complete a simple ‘three rings’ practice, I am also saying the Aramaic Prayer of Jesus each day after the chant and visualization.