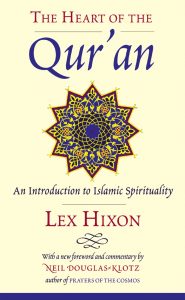 The Heart of the Qur’an:

An Introduction to Islamic Spirituality

Edited and with commentary by Neil Douglas-Klotz

“Neither as Christians or Jews, nor simply as intellectually responsible individuals,” says Hixon, “have members of Western civilization been sensitively educated or even accurately informed about Islam.”

As tensions between America and the Middle East grow, we should promote cross-cultural understanding, not violence. This new edition, with a new foreword and commentary by Neil Douglas-Klotz, allows the reader to drink from the illuminating fountain of the Holy Qur’an–the foundation of Islamic culture.

Hixon’s poetic meditations on over nine-hundred passages from the Qur’an show that they are not relics from the past but exist in a timeless present, communicating as vividly as when they were first uttered. Through clear and accessible language, Hixon illustrates how the teachings of Islam can be applied to contemporary everyday life issues such as love, relationships, justice, work, and self-knowledge.

In addition to the selections themselves, the book contains readable, lively introductions to the tradition of Islam, its basic precepts, and what it says about other religions. As the first such work in English to be written by a Muslim, “The Heart of the Qur’an” continues to show that Islam is among the great wisdom traditions of humanity.

The author Lex Hixon, whom Allen Ginsberg described as “a pioneer in the spiritual renaissance of America,” was the first Western Muslim to translate into English and offer these poetic meditations on over nine hundred key passages from the Islamic Holy Book. First published in 1988, his clear and inviting work reveals the Qur’an’s age-old teachings as one of the great wisdom traditions of humanity.

In this new edition, Neil Douglas-Klotz has rearranged the passages thematically and provided commentary for each major theme. The result makes the teachings even more accessible, allowing the reader easily to find relevant readings for guidance on everyday issues such as love, relationships, work, justice, gratitude, self-knowledge, and prayer.

“Lex Hixon has taken the precious words of the Holy Qur’an and turned them over in his heart so they might speak to those of us who otherwise might not hear the radiant wisdom glowing so brightly within. Beautifully wrought and piercingly true.”

—Ken Wilber, author of One Taste, Sex, Ecology, Spirituality, and The Spectrum of Consciousness

“The Holy Qur’an has been a fountain of spiritual inspiration to some of the greatest minds and hearts over fourteen centuries. Nur Hixon is one who has drunk and tasted. May he be blessed for all the beauty he shared.”

—Kabir Helminski, author of Living Presence and The Knowing Heart, Codirector of The Threshold Society, and Shaikh of the Mevlevi Order

Like a mystical reef diver, Lex Hixon swims the marvelous tiers of the Qur’an. I’m grateful to have him as a guide.

—Coleman Barks, author of The Illuminated Prayer, Rumi: the Book of Love, and The Essential Rumi

Lex Hixon, Ph.D., an accomplished poet, philosopher, and spiritual practitioner, also wrote Mother of the Buddhas and Mother of the Universe. He died in 1995. World-known religion scholar Neil Douglas-Klotz, Ph.D., is the author of several books, including Prayers of the Cosmos and The Hidden Gospel.