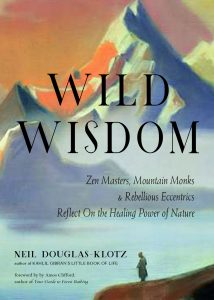 “After spending two intense years with Kahlil Gibran, which resulted in four ‘little books,” I was asked by the same publisher to compile a collection of wisdom arising from the human interaction with nature. I finished this in October, and it will be released in January 2021, entitled Wild Wisdom.

“The book gathers sayings and stories from a selection of women and men who sank their roots so deeply into nature that the wisdom they created can still serve us today. In a year-long treasure hunt, I collected, retold and/or retranslated stories and sayings of the well-known Egyptian “desert fathers” (and the lesser known “desert mothers”) as well as the voices of Russian forest hermits, Sufi mystics, Scottish mountain explorers, European novelists, wandering Chinese Taoists, Kashmiri hermits, Japanese Zen masters, American naturalists and scientists and other generally rebellious eccentrics. Many of them balanced time between solitude and society, challenging the status quo of their time. So the word wild here also means: unexpected, not obeying a pattern that their cultures took for granted.

“Instead of organizing all this by philosophical, religious or spiritual tradition, I have chosen to bring the speakers’ voices together by the settings in which they found themselves: forests, mountains, deserts, rivers and ocean, and with non-human companions—fish, birds, animals, and insects, to name a few. One can hear the effects of these different environments on the way the explorers express themselves.

“This is not surprising. We share to an overwhelming degree the same bodies, the same ways of breathing and making sound, the same potentials for sensing nature. Each individual, of course, varies in subtle yet important ways. We differ first in our relationship to different environments and the abilities we each uniquely possess to express this diversity. Of course, family upbringing and culture–including education, philosophy, and religion–immediately jump in between us and our direct experience. Yet family and culture also evolve over time from our collective relationship to some environment, actual or virtual. In this book, I have chosen the voices and stories of those who, in one way or another, broke through these familial and cultural walls (or at least rattled them). This is why people remembered them.”

Sages and mystics throughout the centuries have sought inspiration in the wildness of nature. This little book gathers the sayings and stories of the women and men who have sunk their roots deep into inner retreat and brought forth wisdom for all times and peoples.

Here we find the stories and voices of desert fathers and mothers, forest hermits, mountain mystics, wandering philosophers, and wise eccentrics who maintained their solitude while living in society and challenged the status quo with humor. From East and West and everything in between. From Christian hermits, wandering Kabbalists, itinerant Sufis, Zen practitioners, Yogis, court jesters, transcendentalists, and freethinkers, Wild Wisdom gathers a timeless harvest for spiritual renewal.